Why We Are Losing Hearts and Minds

This editorial, by Keith Lockitch, really pegged the truth meter for me, when I read it. Here's a sample:

"Where have our leaders gone wrong? What kind of leadership failure can demoralize a whole nation of honest, productive citizens, while leaving suicide murderers stirred to righteous action?"

Why the India Deal is Good

" A closer look reveals the benefits of the US-India nuclear technology agreement."

This article points out the many failures bin Laden has endured since 9/11 and suggests his trump card may be in turning his attack onto his fellow Saudi muslims, in the form of destroying the "largely unguarded" oil pipelines there, to do more damage to America's economy.

per Gus Van Horn's Blog, an excellent snippet from a debate between Rushdie and British MP George Galloway [along with a great observation from Gus] on multiculturalism's "Argument from Intimidation."
Don't miss it...

The above story says that the U.S. State Department claims there are no political prisoners in Venezuela. [Seeing how State is dominated by leftist career intellectuals/diplomats, I see why that statement was made.]

Let's let the blogger from The Devil's Excrement, straight from Venezuela, tell a different story:

Inside911.com is a companion to the National Geographic Channel's 4 hour special on the activities that led up to the attack on American soil by 19 radical Islamist terrorists.
An encore presentation of this four-hour investigative report will be broadcast on September 8, 2005.

"...there must be widows. There must be orphans...We do not differentiate between those in military uniforms and civilians."

The above quotes are just a taste of the kind of savagery we still don't take seriously in this country.


"Yes this is an age of moral crises...Your moral code has reached its climax, the blind alley at the end of its course. And if you wish to go on living, what you now need is not to return to morality...but to discover it."
Ayn Rand 'Atlas Shrugged'
Posted by SecFox HQ at 11:58 PM No comments:

First, the good news. I did some hunting around the internet and found Tara Smith's newest book on Objectivism, Ayn Rand's Normative Ethics: The Virtuous Egoist.
It will be available in March 2006. Here's a link. Hopefully, too, there will be a less expensive(!) quality paperback version available.

Here's one of the scarier aspects of a very scary article...

"Through seminars taught by conservative college professors and devout members of Congress, the students learn that serving country means first and always serving Christ..."
"That puts them at the vanguard of a bold effort by evangelical conservatives to mold a new generation of leaders who will answer not to voters, but to God."


That says it all. Theocracy anyone?

[8/25/05. My thanks to Existence Is Identity for pointing to this article, and my Blog. Added Theocracywatch.org to Blogroll.]

My Random Top Ten Tunes that Kept Me Going Today...

5 Who Knows Where The Time Goes? -- Sandy Denny

8 If Sugar Was as Sweet as You -- Rockpile

9 Look Through Any Window -- The Hollies

10 Shadow On the Wall -- Mike Oldfield

A Picture Worth a Thousand Words? 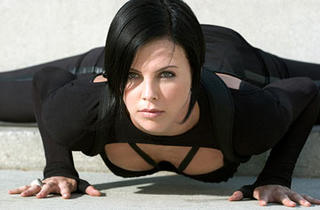 Charlize Theron stars as the acrobatic assassin in 'Aeon Flux'. Due in theaters 12/2/05.


Needless to say, I'll be first in line.
Posted by SecFox HQ at 7:45 AM No comments:

Methinks Thou Protest Too Much

Just finished "The DaVinci Code" last night. Has anyone noticed the incessant howl from religionists about how "false" Mr. Brown's book is?
Ol' Danny must've stubbed some 'devout' toes to generate the kind of heat he's been taking on this book. Notwithstanding that this is a work of fiction mind you!!!
It is an excellent, thought provoking read. By far his best of the four novels he's written.

Here, we have a Nun protesting on the film set of The DaVinci Code.

State Farm Insurance has posted a "Disaster Preparedness Page" and I thought it was a pretty decent thing for others to take a look at. Just in case...

I once respected this man totally. Now I see that he's just another hapless "politician". It's a shame.

It Takes an Individual

...rather than a "village" or a "family". Excellent commentary from Dr. Michael Hurd.

The Resident Egoist over at Existence Is Identity, has an article on an environmentalist who is advertising against getting your children vaccinated (!)

Well worth your time to read.

Amit over at THRUTCH has a cogent analysis of the failure of subjectivism and multiculturalism in Britain [and everywhere else, too] and, offers us the antidote as well.

By Reason or By Force: Chile

Here's a decent article on the Chilean economy and how "markets" are the unchallenged politico-economic model of their rising standard of wealth. Note however, [what I consider to be a misnomer in] the actual title of the piece. Doesn't this equate "reason" with dictatorhip? See for yourself, if I'm correct.

Does citizen journalism during the London bombings signal a media revolution? The average person now has the tools to become a key newsgatherer, whom big media will ignore at their peril.

For Shame of Doing Wrong

Don Watkins, over at Anger Management, has a cogent blog post on who is to blame for the death of innocents in wartime.
It's always a great pleasure to read younger men and women who are gifted thinkers and writers. Mr Watkins is definetly one of them. I visit his blog every day.

Two Peas in a Pod

I'm currently enjoying "The Da Vinci Code" by Dan Brown. In that novel, the organization known as Opus Dei is used as a backdrop of corruption and conspiracy. Well, knowing Mr. Brown's capabilities as a thorough researcher, I wonder. Anyway, the teachings of this "cult" are based on a book known as "The Way" or "My Way" by Josemaria Escriva.

All this blather is to point to an Letter I found from Escriva to General Francisco Franco, that endorses Franco's pronouncement of the catholic faith as the barometer of his rule.

Here is the key passage of that letter: [quoting Escriva]

"...I cannot help but rejoice as a priest and Spaniard that the Chief of State's authoritative voice should proclaim that, "The Spanish nation considers it a badge of honor to accept the law of God according to the one and true doctrine of the Holy Catholic Church, inseperable faith of the national conscience which will inspire its legislation."


As objectivists, we know that altruism is the foundation of all religion, and, "the hatred of the good, because it is good." Speaking for myself, I didn't learn that it was also the foundation of Marxism until I read Miss Rand. Marxism being the secularized version of religious ethics.

It all boils down to, "those who fail to learn from history, are doomed to repeat it."

Joke of the Day


Jesus walks into the hotel, approaching the check-in. He tosses three nails upon the counter and asks, "Can you put me up for the night?"

SecFox HQ
I've either visited and/or traveled in 33 of our 50 states. I look forward to doing the rest.